Social Soups is a platform project for aesthetics of social activities regarding the social implication of food.

in collaboration with Maria Rebecca Ballestra

Social Soups is a program for social transformation through art focusing on food as an elementary component. The project Social Soups combines artistic and social activities regarding the cultural and social development in specific contexts of urban areas, which hosts cultural and social diversities. Furthermore, the project aims to include aspects of food in relation to territory, science, and environment as well as to call attention to socio-political topics. Social Soups intend to be an open and free participatory and disposable platform with which can be collaborated spontaneously. The project invites artists to “prepare a social soup”; artists who focus on their researches and artistic operations on food and formulate diverse social, cultural, economic, environmental and political interpretations. By using food and through multiple techniques and expressions the artists deal with important subjects related to nutrition: from food as means of survival and dependencies to food as a condition of social injustice and obsessions.

The mixture of different cultural approaches, problems, and destinies are like a soup in which diverse ingredients have to amalgamate in order to offer everyone the opportunity to be “fed”. Through food can be realized strong and multi-sensorial relations with the audience and the territory. Beyond feeding our bodies, food enriches our minds and – when becoming an instrument of artistic operations – is an agent through which the audience can make the acquaintance with cultural and traditional aspects as well as customs of other countries. Furthermore, the artists create a strong relationship with the audience, which becomes actively part of the artistic operations. Based on their knowledge and personal research, the artists reflect through their own poesis on the multitude of critical relations moreover as result of exchanges the contemporary human being has with its habitat.

Public engagement is a core issue of Social Soups aiming to address artistic activities directly to the citizen as audience as well as an active participant in order to increase awareness of social justice and foster critical regionalism.

We are living in times in which societies undergo massive changes caused by the economic and environmental crisis, geopolitical conflicts as well as by new technologies and capitalization of resources. Societies and urban areas are signed by mobility and agglomeration built by different interests. The refugee flow and the occurring humanitarian crisis are the most eminent facts communities have to envisage, moreover urges to react and to reconsider policies as racism and xenophobia are enhancing through activism and politics. Artistic activities of the Social Soups project aims to invite the audience to overtake an active role pointing to democratic values within the well-being of everyone. This can happen through artistic operation as they are an expression of critical position and driven by utopia mission regarding the social, spiritual, natural and intellectual aspects of human life. Therefore art becomes an antagonistic space in societies, a turning point of awareness towards social and environmental issues. As the specification of the artistic operations is food, which is a universal “language” and part of human life, Social Soups is able to create a platform where different activities of social life can meet, be reflected on, communicate and elaborated. With the Social Soups projects can be created models of community policy, which are showcased by different means. 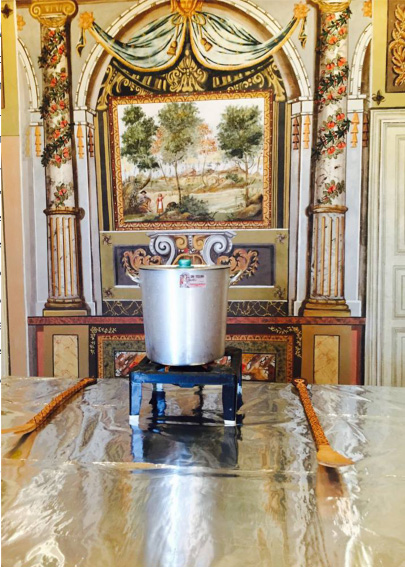 Art as possibility of social transformation

Famous artists use food to reflect on social engagement asking those questions. Artistic operations instigate transformation processes through new and unusual combinations of elements and through realization of visions. Because of that, the expansion of interactions between artist and society becomes more and more important. Social Soups tries to go a step further by creating platforms of public engagement through art by using food. Food as aesthetical concernment put a light on various aspects of ethical, psychological, cultural and political attitude. Thus exploring food issues can be a commencement of changes for the single life and for the environment in general. For this reason a “social soup” is a metaphor depicting the necessity to gain awareness that food function in social practices. The project Social Soups includes aspects of food preparation, the territory of its origin and consequently aspects of food in relation to migration, envisaging the building of new social agglomerations and new socio political possibilities especially in the urban area as the world population became urbanized. Hence the artists see a possibility of public engagement as the project aims furthermore to collaborate with communities in order make a social transformation practicable.

The above-mentioned artistic practice highlights the core meaning of culture: understanding “the other”. Social practice is intrinsically linked with cultural practice and therefore artistic operations are of vital importance especially as crisis urges single and communities to undergo massive changes in the social apparatuses. Like in the urgent situation of migration flows is moreover given a chance for regional criticism and self-regulation of communities in order to create a real social and livable environment instead of functionalize people and environment as it happen in capitalistic hegemonies. The inclusion of artistic operations in the social life opens the possibility to understand co-existence and importance of the “different” – the Other – as condition to foster solidarity and constructive modifications.